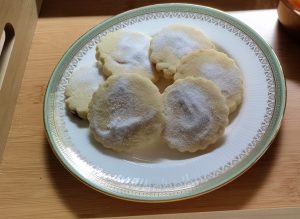 Sometimes when deciding what the next ‘Taste of History’ is to be, it is easy to overlook some of our traditional items. After all, how many of us have not moved the humble Shortbread to one side in our quest for the chocolate covered, or the cream filled, or even the exotic berry flavoured item hidden beneath? Well . . . . . now is the time to put this staple of the biscuit barrel front and centre and in doing so, reveal Shortbread’s remarkable journey through time!

However, before delving back, it is possibly a good idea to list its modern-day characteristics and features –

Shortbread is a crumbly, buttery biscuit, available all the year in rounds and fingers and at Christmas in tartan covered tins, often containing triangles which are strangely named Petticoat Tails.

Most Shortbread sold today is plain but some have flavourings for example lemon, others have additional ingredients like chocolate chips or dried fruit..

So having set out all the above we have a check list to determine which of these are true to this biscuit’s historic roots. We are now ready to start our journey.

Some historians believe a round, cereal based ‘cake’ was used in pagan times as part of the Winter Solstice ceremonies to encourage the sun’s rebirth. Evidence is of course very limited to support this claim but fast forward to the Medieval period and the evidential ground is more secure.

Records show that there was a product called Biscuit Bread. This was left over bread, which was dried out in a cooling oven until it was like a rusk. (By the way – Biscuit simply means Twice Baked in French!) So popular was this that it took on a life of its own, and as with any recipe it began to evolve. To start, fat, possibly lard, dripping or butter, was added and the yeast was gradually omitted. As the fat content increased, this affected the texture of the finished product. It was now not like bread; it was crumbly or ‘Short’ – a very old cookery term to describe this kind of texture. To differentiate between this new product and the old Biscuit Bread it was given a new name – Short Bread!

It continued to grow in popularity as having so few ingredients most people could afford ‘a little bit of luxury’  at special times of year, notably Christmas and weddings.

Shortbread is still traditional fare in Scotland at Hogmanay when First Footers call to welcome in the New Year. And . . . . in Shetland a decorated Shortbread is broken over a bride’s head on the threshold of her new home.

Our story moves on to chart another change; Short Bread became a little sweeter. Originally the sweetening agent could have been honey as sugar was not widely available and even when it was in the 16th century, it was incredibly expensive. This is probably why all the old recipes give a much smaller amount of sugar than do its modern-day counterparts.

Having now reached this point in history it is time for Mary, Queen of Scots to enter the Short Bread story and for the strange Petticoat Tails name to be explained.

Mary grew up in the French court and regularly ate the Petites Galettes – little cakes – made in the Royal kitchens or perhaps bought from skilled patissières in the city. When she acceded to the Scottish throne and came to live in the country, she missed these little treats. Her chefs, using the ingredients and the recipes available, tried to reproduce them for her. The name Petticoat Tails is believed to be a ‘corruption’ of the French term for little cakes. As plausible as this is, it doesn’t explain their traditional triangular shape.

Now it is time for story number two! This also comes from the 16th century.

The triangular shaped biscuits, when put together created a complete circle which resembled the gored petticoats worn by fashionable ladies of the day. To make these petticoats accurately a pattern, called a Tallies or Tally was used. It was this name and the shape which gave rise, ultimately, to these biscuits being called Petticoat Tails! You the reader can now take your pick! Which story do you believe?

Traditionally Shortbread comes in one of three shapes – round or fingers or triangles – and each is between ¾ – 1” (20-25mm) thick. There is no problem cooking the individual rounds or fingers but the triangles, initially cooked as a large circle of dough with the individual pieces only scored not cut through, created a real difficulty. If the centre of this large thick circle was not cooked thoroughly to crispness, the points of the triangles broke away and the finished effect spoiled. Sometimes to ensure the centre was cooked the whole became too brown. So for many of these early recipes, particularly when cooked in ovens where the temperature was difficult to regulate, the Petticoat Tails were cooked in half circles, or as one recipe put it – ‘from the whole circle of dough shape two Gothic Arches’.

By the 16th century many cook books were being published and so food historians now have much evidence to look at the ingredients used. The basic ones were flour, butter and sugar. There was generally a slightly higher proportion of butter used than in the recipes of today and it was usually melted, cooled and then used to combine everything together. This makes a rather greasy dough, tricky to handle and with a rather grainy texture.

If the butter was more than is used today, the amount of sugar is generally smaller. In some recipes to 1lb (500g) flour only 2oz (50g) sugar was the recommended amount!

Whilst this is interesting it was not as surprising as finding out what additional ingredients were used from the 16th to the mid 19th centuries.

Mary, Queen of Scots liked caraway seeds and so too must other people as these made many appearances in recipes. But, then so too did strips of candied peel and slivers of almonds. All these and many of the traditional sweet spices figured in the cookery books of influential writers – Mrs Frazer’s in the 18th century, which incidentally still included yeast like the Medieval Biscuit Bread, Eliza Acton in 1843, Isobel Johnstone in 1850 and Isabella Beeton in 1861 all carried Shortbread recipes with these additional ingredients. But, by 1870 when S Annie Frost recorded her recipe, they had all disappeared. It was then that semolina or rice flour became the ‘extras’ to help create the grainy or sandy texture which was deemed to be important.

The addition of candied peel and nuts was a surprise, particularly the former. The modern-day small cubes of peel couldn’t be thinly sliced so that meant sourcing the old-fashioned style of peel which was made and kept in large pieces. The alternative was to be very Victorian and make my own. I decided on the latter course of action! Making my own candied peel was definitely a first! Information about this and the recipes and methods used will be as a separate post on Mrs Bird’s website.

Before moving on there is just time to look back at our modern-day check list for Shortbread – all characteristics and features can be ticked, the modern Shortbread is a true ancestor of its historic heritage. They are still made in one of three shapes, the thickness is correct, so too are the basic ingredients and there are additional items added and I’m sure that if chocolate chips had been around at the time of Mary, Queen of Scots, she too would have embraced them enthusiastically.

And now to some recipes. I thought some readers might be interested in some of the old receipts (this is the English word, recipe is French) I researched before deciding on the best one for museum visitors to try.

Take a peck of flour, beat and sift a pound of sugar, take orange peel, citron and blanched almonds, of each half a pound, cut into pretty long strips and mix these well with the flour, then make a hole in the middle of the flour, put in 3 tablespoons of good yeast, then work it up, but not too much, roll out, prickle (don’t you just love that word!) them on top, pinch them neat around the edge and strew sugar, caraways, peel and citron on the top. Fire it in a moderate oven.

I would imagine that some liquid, water? would be added to form the dough but the amount isn’t mentioned!

Some people might ask why did I particularly choose these recipes? Simple really – the names of 2 of the cooks sounded Scottish! And I also just wanted to show everyone the amounts of ingredients our ancestors regularly worked with!

Recipe used for the Museum was a scaled down version of

Combine all together by either melting the butter and allowing it to cool before using or combine all ingredients using only the heat of the hand. Either shape into the Gothic Arches and score into triangles or cut out into rounds. Bake 150C fan, Gas Mark 2 – 3 for 12 – 15 minutes for the small round biscuits depending on thickness or 20 – 25 minutes for the Petticoat Tails.

So, next time when faced with a biscuit selection don’t overlook the humble Shortbread because now you know its history you know it has Royal Connections and there’s nothing humble about that!

Just a footnote to all of the above –

To our modern tastes, Shortbread made with the proportions of ingredients from yesteryear are neither as sweet nor as crumbly as our modern palettes are used to. This is primarily down to the amount of sugar used.

I am sure that if this ingredient had been more widely available and/or cheaper then the amount used by our ancestors would have been increased.

As we have seen, recipes evolve over time. So to use a modern day version and to include some of the flavourings and additions used by our forebears is no crime. The biscuits can still have a ring of authenticity, particularly if the candied peel used were to be home made!

Therefore you now have the choice, use one of the recipes given above or use a modern day one. To this end I give a very simple, very easy to remember and very easy to scale up recipe below.

1oz (25g) candied peel or finely sliced almonds. Use your own judgement on any spices you choose to use.

I usually scale this up to 12oz (300g) flour and use the food processor to combine the mixture. Wouldn’t our many times removed great grandmothers have found one of these marvellous! However the food processor can only be used for the basic dough, the additional ingredients must be worked in by hand.