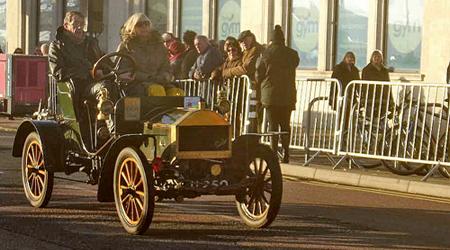 The first Sunday in November is traditionally the day of the London to Brighton Veteran car run. This is an event for cars made before 1905 and commemorates the abolition of the 1878 Red Flag Act, the need for a man to walk in front of a car.

Once again our car was entered by Brian Hodges and Andy Smedley, long time members of Carlton and District Motor Club. The entrants, some who had bought their cars from America and Australia, were woken by gale force winds and heavy rain, with water right across the road in many places as they left the Hyde Park start. The Celer was nearly the last car to leave the park and it was obvious by the number of cars that Andy drove past that it was going to be a severe test of driver and car.

Nottingham Industrial Museum’s Celer Car arrives in BrightonThe car started to misbehave on Park Lane, and was struggling with a carburettor float problem that kept reoccurring throughout the day. Gradually the weather improved as the car headed down the A23 towards Brighton. Whilst the crew were checking the car and taking on refreshments, a lucky opportunist helped themselves to the spare can of petrol that was on the back of the car!

Meanwhile the gale had been blowing in Brighton all night. The finish gantry and hoardings that had been erected on the Marine Drive during the previous two days had to be completely removed when it was feared they would be blow into the sea.

By the time Mr and Mrs Hodges got to Brighton the sun was shining and the sea was a lot calmer than it had been in the morning. In a year with a very high retirement rate it was nice to see the car come over the finish line once more.
The Celer is a credit to those Edwardian engineers that were at the roots of car manufacturing in the country. If only they had known what they were starting!