This month’s Steaming Sunday recipe contained a very Victorian product – Treacle. It comes in many different forms ranging from light through to very dark. And it is this ingredient which has caused some debate this month!

All recipes from The Victorian Kitchen are first tried out on our wonderful volunteers. They offer comments and observations on the suggested “Taste of History”. Opinion over this one was divided. Some liked the strong treacle taste, others said “Not enough ginger”, whilst a few would have preferred a sweeter confection.

The dish which provoked debate was Acton Gingerbread – the recipe was Eliza’s own family one and is marked as such in her book – ‘Modern Cookery for Private Families’.

It is always a challenge taking a recipe from a bygone age and trying to reproduce it using modern ingredients and equipment, and, as if that wasn’t enough, there’s always a difficulty in getting 21st century taste buds to try to think like their Victorian ancestors.

However, it was obvious that before this latest offering was let loose on visitors there needed to be serious thought. Then came the Eureka Moment! Perhaps treacle in the 1840s wasn’t as processed as our modern day one. Perhaps it was slightly sweeter and therefore less dark. After all, modern Gingerbread recipes have more sugar which counterbalances the strong taste of black treacle.

So, a slight tweak to the recipe of using half golden syrup and half black treacle –  and everything 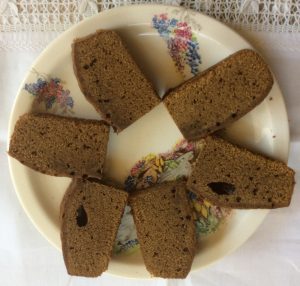 was back on track. Phew! Not historically accurate (Golden Syrup wasn’t sold until the 1880s) but definitely delicious.

The method for this dish is an “interesting” one. It contains no chemical raising agent, so the finished result is rather close textured. It does rise a little in the oven, but this is dependent on how much air is beaten in during the making.

After having made this recipe, now several times, I have the greatest respect for our baking Victorian ancestors. My arms ached after only beating in the first two ingredients… and I only made half the quantity given in her book. Here I have to confess that I soon resorted to using the electric hand mixer. I would certainly recommend that anyone wishing to make this cake, not only does the same, but also sticks to the half quantity given below. It would take a large free standing machine to cope with the full amount … or someone with more stamina than me.

I know it seems a ‘waste’ to use butter as the rich flavour will not be tasted. However, modern day hard margarines contain oil and it would not beat into the cake in the same away as butter, it could make the finished cake rather oily.

Get everything prepared and ready to use before starting mixing. It makes it easier and makes sure the maximum amount of air is not only beaten in but stays in.

When the cake has cooled it will have a hard crust. This is just as it should be. The cake inside will be softer and hold more moisture than outside.