This recipe has a very long history. Many authorities state that Jumbles came from the Middle East and were brought back to Europe by returning Crusaders,

OR some say they originated in Italy or France and arrived at our shores via the Venetian traders,

OR others are convinced they arrived in Northern Europe from Spain via Moorish invaders?

Who knows? The different names and the different spellings used over the centuries reflect all of these possibilities. But then we should expect this for a dish which goes so far back in time.

Who knows the truth? However, what is not disputed is that this type of biscuit has been very common in England since the Middle Ages. In fact, rumour has it that, this was taken onto the battlefield at Bosworth by Richard the Third. He is said to have had some tucked away in his saddle bags. Obviously, they were thought an ideal mid battle light snack.

Traditionally these Jumbles were made in the form of rings or rolls. They kept well and reputedly were quite safe to eat after a year and apparently, they weren’t very stale! These shapes made them easier to transport and they were often the common food of travellers.

As the Middle Ages moved into the Tudor era the biscuits were made into more elaborate designs – S shapes, single knots, double knots, Celtic knots and even shapes which look like those of the modern day Pretzels.

In Europe and the Middle East spices, exotic flavourings and nuts were the additional ingredients. In Tudor times the flavourings to choose from were  – aniseed, coriander, fennel, mace, nutmeg, Caraway and rosewater but nuts  – never.

And then Jumbles were on their travels again. This time possibly on the Mayflower – destination the New World. Here the Sugar Cookie was born with a whole new set of flavourings including lemon, cinnamon, ginger and, some even acquired a sugary coating.

Jumbles have now been brought into the 21st Century. It was one of the technical challenges on the Great British Bake-Off set by Paul Hollywood. 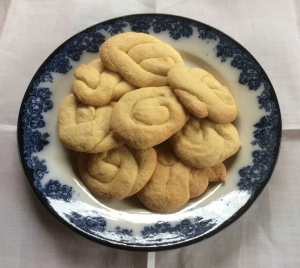 The recipe given below is taken from a cookery writer of the Victorian age – Eliza Acton. It’s from her book Modern Cookery for Private Families, first published in 1843. As there have been many different flavourings mentioned above,  I have chosen to stick to Eliza’s – she used lemon zest.

Before you move onto the recipe itself, a word of caution needs to be issued. These are Biscuits NOT Cookies! Biscuits by their nature are CRISP and CRISP is what these biscuits are.

Comments made by some of our volunteers, who test all the recipes first, said that they were ideal for dunking!

Rasp on some good sugar the rinds of 2 lemons, dry, reduce it to powder and sift it with as much more as will make up to a pound in weight, mix with it one pound of flour, 4 well beaten eggs and 6oz of warm butter, drop the mixture on a buttered tray and bake the Jumbles in a very slow oven for 20 – 30 minutes.

They should be pale but perfectly crisp.