October’s Recipe from the Victorian Kitchen

When researching recipes each month, Eliza Acton’s and Isabella Beeton’s books, along with several others, are trawled for possible “Tastes of History”. The choices available are both many and various.

However, sometimes when looking for a suitable dish, it’s easy to be swayed by the spectacular or stunning ones, or those with the interesting ingredients. Perhaps it’s the combination of flavours which tickle the taste buds. Whatever concentrates the mind, it’s the ordinary, the everyday, the homely dishes which end up being skimmed over or ignored. They shouldn’t be! They are the ones which have graced many a family tea table for decades. It’s the first bite of one of these comfort foods which often releases long forgotten memories of family meals, or tea with Grandma and Grandad or even just scenes from childhood.

This month’s Steaming Sunday dish is one of those.

Eliza called this recipe – Imperials – a much more imposing name than the one given by subsequent food writers. Imperials were the forerunner to Rock Buns. Remember rock describes the shape and appearance NOT the texture! 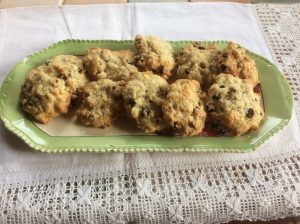 As these come from Eliza‘s kitchen in the early years of the 19th century they are made with plain flour. That means there is no raising agent, except that which is introduced by the skilful cook. It is, from our 21st-century view of baking, hard to believe that when Eliza and her cook were testing and trialling all her recipes that neither baking powder nor self raising flour had been invented.

It was the chemist, Alfred Bird in 1843 who first put the components together to create baking powder – his wife was allergic to yeast. Incidentally she was also allergic to eggs which is why he also created custard powder. The baker, Henry Jones added Bird’s invention to flour two years later to make the self raising version.

However, neither of these inventions were available to the housewife until the early 1860s! Initially they were offered to the Army and Navy as a way of making the food for the common soldier or sailor better and more palatable. The Army used Bird’s invention in the Crimean war but the Navy rejected Jones’, so sailors continued to eat hardtack biscuits for several more years than they need have done.

1. Rub the butter into the flour until it resembles fine breadcrumbs
2. Stir in the sugar, currants, candid peel and the lemon zest. Make sure all are well dispersed, particularly the candid peel
3. Add the beaten eggs and mix with a wooden spoon until a stiff paste has formed in the bowl
4. Divide the paste into 16 even sized rough rocky heaps on well greased or silicon lined baking trays. Place them roughly 2” apart
5. Bake at 170C, 160C fan, Gas Mark 3 for 20 minutes. The cakes should be a pale golden brown and when pushed with the thumb move easily on the baking tray
6. Put on a cooling tray to cool completely before storing in an air tight tin.

NB these are best eaten slightly warm on the day they are made. They can be kept in an air tight tin for a couple of days. They freeze well.

Events
Regular activities
Plan Your Visit
Ways of Giving
Volunteer
Copyright 2018 - All Rights Reserved
Back To Top
We use cookies to ensure that we give you the best experience on our website. If you continue to use this site we will assume that you are happy with it.OkPrivacy policy