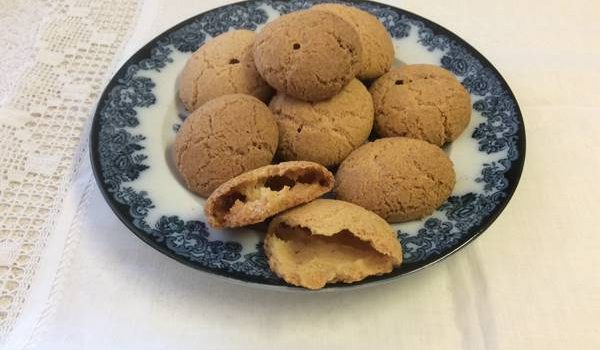 A Recipe from the Victorian Kitchen

Many of the recipes (or to be correctly English, I should call these receipts, because the word recipe is French) on offer in the kitchen have been gleaned from Eliza Acton‘s or Isabella Beeton‘s cookery books. What is interesting is that in both books there are no regionally attributed recipes. Obviously local dishes have existed for centuries but neither book gives the slightest hint nor the merest nod to one.

So, for this month’s ‘A Taste of History’ I’ve had to search in other places as I thought it time that a delicacy from the East Midlands should be on offer. Fortunately, I didn’t have to look far, only as far as Grantham to find – Grantham Gingerbreads. It also seems quite appropriate to offer these as yet again, the Nottingham Goose Fair has had to be cancelled because of COVID. These are often on sale on some of the many food stalls at the fair and for people who look forward each year to having this gingery, sugary treat, they won’t have to miss out. They can make their own!

These were a firm, family favourite in many households and they continued to be made commercially until the 1970s. Then, they fell out of fashion. The rise of the supermarkets and the demise of small independent bakers made these a thing of the past.

Some visitors to the museum I know do remember them from their childhood but I wonder how many actually know the story behind this very unique biscuit.

In days of yore, when it took four days by stage coach from London to York, coaches stopped overnight at Grantham to allow weary travellers some rest. These coach passengers regularly bought food to sustain them on their, seemingly, interminable journey. One of the items bought was a hard biscuit called Grantham Whetstones. These are actually the first biscuit that is recorded as being offered for sale.

Apparently, in 1740 William Eggleston, a baker, moved from Newark on Trent to Grantham to open up his own business. One morning he was attempting to make Grantham Whetstones when he got the ingredients mixed up and what emerged from his oven was not a hard flat biscuit but one that was crisp, crumbly and well risen!

Thus, it is said, that Grantham Gingerbreads were born!

For those of you who might be interested in the Whetstones recipe, I record it here. You will then be able to compare both and decide for yourself whether you think this story is true or not.

This is the recipe as it was recorded in Tib’s Titbits of 1869.

‘Beat the whites of five eggs to a strong froth. Add to these 10oz of loaf sugar which has been well pounded and sifted. Add 1lb fine flour and a few caraway seeds. Include a small piece of saltpetre, about the size of a walnut which you have previously pounded. Mix altogether, roll out thinly, cut into shapes and bake.

Saltpetre or potassium nitrate, has been used since the Middle Ages to preserve food, which of course is why the Whetstone biscuits were popular with travellers. Today this is used in some bread, toothpaste and is part of the curing process for some meats.

Fortunately, there has been a resurgence in this unique biscuit’s story and a local businessman has started making them again. But, as the recipe is given below, you don’t have to travel to Grantham to taste them!

1. Beat the butter to a soft paste
2. Gradually beat in the caster sugar
3. Add the egg a little at a time, beating each addition well into the butter and sugar mix
4. Sieve the flour and ginger together and gradually combine with the ingredients in the bowl to form a thick paste. If the paste is very soft, wrap in cling and chill for 10 minutes in the fridge.
5. Take small pieces of the paste and roll into a ball. Put these onto greased or silicon lined baking trays, space them well as the biscuits do expand on cooking. Aim for around 24 – 30 biscuits
6. Cook the biscuits at 150°C, 140°C fan, Gas Mark 3 for around 30 – 40 minutes. The biscuits should be a pale golden brown and very crisp
7. Once cooked put onto a cooling tray and allow to cool completely before transferring to an air tight tin where they can be kept for a week