July in the Victorian Kitchen

July’s Recipe from The Victorian Kitchen

This month’s Steaming Sunday’s ‘A Taste of History’ is called by Eliza Acton – Geneva buns, and by Isabella Beeton – Plain buns (she so loved the word Plain!).

Both of these are made from rich yeast dough containing Flour, salt, yeast, butter, eggs, milk, sugar, currants and candied peel.

However, if you, like me, are prepared to dig a little deeper into the confusing world of the Victorian Bun you’ll find that the London bun appears to be a very similar confection!

Further research shows that the London bun could be square, round or finger-shaped. They could be glazed with egg or milk, have crushed sugar or a thick layer of icing adorning their tops. They were said to have originated in 1851 and were a “street food” of the Great Exhibition but then they were called London Bath Buns. You can guess from this name that here is yet another variant to be considered!

So, given all of the above, what was I to call these offerings for our Sunday visitors?

Simple really! Eliza Acton’s recipe pre-dates all the others, so Geneva Buns was what was on offer.
Eliza did suggest that Saffron should be used as a flavouring and colouring (vivid yellow) but if this was disliked it could be omitted. I decided to omit – Saffron is not always easy to find, and is expensive, as it was in Victorian times.

Saffron is gathered from a particular variety of autumn crocus. Once the flower has opened the stigma and styles, now called Threads, are removed and dried. Weight for weight Saffron, of the highest quality, is the most expensive spice in the world!

Eliza wasn’t the only one to give suggestions about possible flavourings for these buns. Isabella suggested caraway seeds and even said that they could be turned into Hot Cross Buns by adding ground allspice and putting a cross on the top.

For those of you who are interested in how our Victorian ancestors cooked, I have included both Eliza’s and Isabella’s recipes as they show two different ways of preparing the yeast dough. Both create a ‘(yeast) sponge’. This uses only some of the ingredients to start and allows the yeast time to ferment and begin the rising process before the other, more yeast inhibiting ingredients – sugar and butter – are added.

If you have a whole morning available at home, you might like to try one of these “old-fashioned” methods. That is once you have sourced the appropriate type of yeast! However, if like me, you’re short of time, I give the modern-day method so you can make your own ‘Taste of History’ in a fraction of the time. 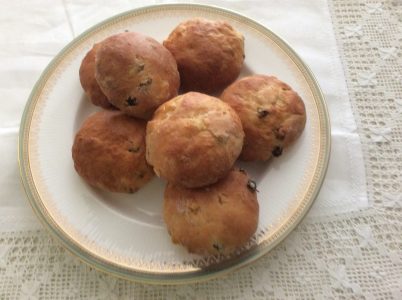 If you have a bread maker using the dough cycle is by far the easiest option! If you do this, pick up the method at point 5

1. Melt the butter over a low heat but do not allow it to get too hot. Add this to the milk
2. Sieve the flour and the salt together into a bowl, stir in the yeast and make a well in the middle
3. Pour into the well the beaten egg, and the butter/milk mixture. Mix to a soft dough. This will be quite a sticky dough so mixing and kneading in the bowl will be easier than on a floured table. Mix for about 5 minutes to achieve a soft and elastic dough
4. Put the mixture into a clean, floured bowl. Cover with a damp cloth or cling film and leave in a warm place for 1 – 1½ hours to double in size
5. Once the dough is well risen, leave it in the bowl and add the remaining ingredients. Mix these in very well, re-kneading the mixture in the bowl for about another 4 minutes
6. Turn out onto a floured table, divide into 16 even-sized pieces. Shape each one into a smooth round and place on silicon sheet lined or greased baking trays, allowing space between each bun for extra rising
7. Cover with cling film and allow the buns to prove (rise) for another ½ hour
8. Bake the buns in a hot oven 200C, 180C fan, Gas Mark 6 for 20 – 25 minutes. After 10 minutes brush the tops with milk and then complete the cooking time
9. Once cooked – tap one on the bottom, if it sounds hollow, it’s cooked – transfer to a cooling tray, cover with a clean tea towel if a soft top is required

Additional points –
As this is a Victorian recipe the texture is not as light and spongy as would be produced today. They would have been eaten just as they are. Modern tastes might like them split and spread with a little butter or you could turn them into London Buns and put some icing on top.
They freeze well – but obviously without the butter or the icing!

Do not be tempted to try to make the old fashioned method using the modern fast-action yeast. It will not work!

The following recipes are the original Victorian ones.

Break down into very small crumbs 3oz of butter with 2lbs of flour, add a little salt and set the sponge with a large tablespoon of solid yeast, mixed with a pint of new milk, and a tablespoon or more of strong saffron water. Let it rise a full hour, then stir in a couple of well-beaten eggs, with as much hot milk as will render them lukewarm to make a light, lithe dough.
Leave it for a ½ to ¾ of an hour and then mould the dough into small rolls, brush with beaten yolk of the egg and bake them 20 to 30 minutes.

The addition of 6oz of good sugar, 3oz of butter, half a pound or more of currants, grated rind of 1 large lemon and a couple of ounces of candied orange peel will convert these into excellent buns.

To every 2lbs of flour add 6oz of moist sugar, half a gill of yeast, half a pint of warm milk, half a pound of butter. More warm milk will be needed.

Put the flour into a basin, mix the sugar with it, make a hole in the centre and stir in the yeast and milk (which should be lukewarm) with enough of the flour to make it the thickness of cream.
Cover the basin with a cloth and let the sponge rise in a warm place which will be accomplished in about 1 to 1½ hours.
Melt the butter, do not allow it to boil, stir it into the other ingredients with enough extra warm milk to make the whole into a soft dough. Then mould into buns about the size of an egg.
Lay them in rows about 3” apart and set them to rise again until double in size, put them in a good brisk oven.
Just before they are done, wash them over with a little milk. From 15 to 20 minutes will be required to bake them. These buns may be varied by adding a few currants, candied peel or caraway seeds to the other ingredients and the above mixture answers for Hot Cross buns by putting in a little ground allspice and impressing a tin mould in the form of a cross on top.

Average cost one penny each