Easter Cakes (or if you prefer) Easter Biscuits!

Question – When is a cake not a cake?

Answer – When it’s a biscuit!

Visitors to the museum over the Easter period were able to sample this delicately spiced Easter fare which, even though they look and feel like biscuits, are called Easter Cakes!

This is yet again a recipe whose origins are obscure. They, or similar items, are thought to originate in the West Country and use as a flavouring Cassia oil (similar in taste to cinnamon). Bristol was the main importing centre for this product. But all the counties of the West Country claim ownership of this dish.

Historically, these Easter Cakes were only served on one day of the year. Like Hot Cross Buns, which were only eaten on Good Friday, these were only eaten on Easter Sunday. Given as presents to family and friends after the church service, tied up in threes with a ribbon, they were a reminder of the Holy Trinity. 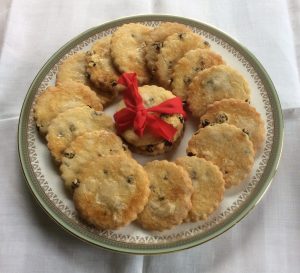 To try to explain why these are called cakes is tricky. I can only guess it is to do with their size. They are supposedly to be cut out into 5” (150 mm) rounds; a size akin more to a cake than a biscuit. This is only my idea, you may have other thoughts.

The recipe given below is not from either Eliza Acton’s nor Isabella Beeton‘s book. Neither of these weighty Victorian tomes mention anything like this, associated with Easter or not. Could it be that this custom was mainly a rural one, or had died out with the middle classes? Yet another mystery to investigate.

A note about making these biscuits:

Remember this is an old recipe – soft margarine did not exist! Use either block margarine or butter.

The “cakes” I made for the museum were smaller than the traditional ones so the number made and cooking times in the main body of the recipe refer to my variation. Traditional large-sized cakes will need 20 – 25 minutes as a rough guide.