Christmas Puddings from The Victorian Kitchen

If you get your skates on you can still have a home-made Christmas Pudding for The Big Day.

This year, last Sunday, November 24, was ‘Stir-Up Sunday’, the day decreed by our Victorian ancestors when the Christmas pudding should be made. We, however, have a much easier time than they did. For them it was days of preparation – raisins had to be stoned, currants cleaned and washed, suet chopped, candied peel made and sugar pounded to the correct degree of fineness. Phew!

Lots of traditions and rituals surround this festive dish, many going back centuries. These are just a few –

13 different ingredients should be used in memory of Jesus and his 12 disciples.

Charms were stirred into the uncooked mixture and for the ‘lucky’ person who found one in their portion of pudding it foretold events to come over the next 12 months. A silver sixpence – wealth. A ring – marriage. A thimble – spinsterhood. A button – bachelordom.

Each family member on this special Sunday had to stir the pudding and make a silent wish. This had to be done clockwise; to stir anti clockwise was thought to bring bad luck! 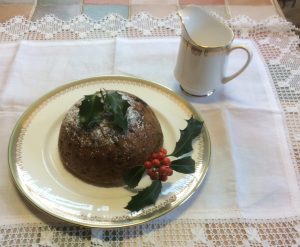 In the Victorian kitchen this weekend two different puddings were available for tasting. One came from Eliza Acton’s book, the other from no less a personage as Charles Elme Francatelli, Chef to Queen Victoria in the early years of her reign.

I can hear people wondering what the difference is between these two recipes. Well, in a nutshell, the simple answer is – Not A Lot!

At this time the range of ingredients used in all Christmas puddings, from the highest to the lowest tables, were very similar. The main difference lay in the amount of the expensive ingredients used. So if you were eating with Mrs Cratchit and her family, breadcrumbs and apple would have figured largely in the making. However, dine at the Royal Table and a more heavily fruited and spiced desert would be served.

The two chosen for tasting this weekend are representative of puddings eaten around 1840. Eliza’s is her own family recipe and is typical of that eaten by the lower middle classes. Francatelli was only the Royal Chef for about 3 years and this is a right Royal Recipe!

Both these and a third one from the same period are given below. However, for anyone wishing to give one of these ‘a go’ it might be worth looking at the Notes which are at the end of this document.

This is half the quantity given in Eliza’s book

This is the rich version according to Eliza. The less rich version has 2oz (50g) flour and 2oz (50g) breadcrumbs, all other ingredients remain the same.

It is also half the quantity given in her book.

The quantity given here is a quarter of the ingredients given in the original recipe.