A Recipe to Celebrate a Royal Jubilee

As the nation looks forward to the Queen’s Platinum Jubilee celebrations to mark her 70 years on the throne, we in the Victorian Kitchen look back at other similar events in this country’s history in order to identify some ‘common ground’. 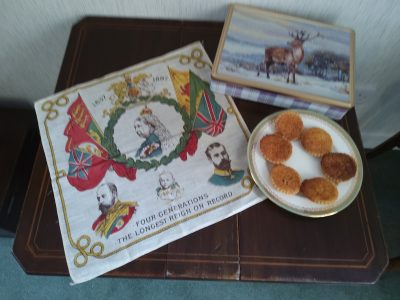 Apart from detailed records for George III’s Jubilee, there are few accounts of how these milestones were celebrated by earlier Kings who had reigned for just as long. The information that does survive shows that these events were all marked with processions, music, church services, lavish banquets and some kind of spectacle  . . . . . . sound familiar?!

Our present Queen is now our longest reigning monarch. She surpassed that of her Great, Great Grandmother, Victoria, earlier this year. Both of these ‘doughty ladies’, their reigns and their Jubilees have been fashioned by a ‘modern era’ approach for a more open and accessible monarchy. Therefore, it is most appropriate to look more closely as the two Jubilees of Queen Victoria and to identify where this ‘trend’ began.

Victoria’s Golden Jubilee in 1887 was seen by her Government Ministers as a way of reconnecting her with her subjects. After the death of Prince Albert, her husband, in 1861, Victoria retired from public life and went into a period of deep mourning; she became a virtual recluse. To many people in the country she was only a name and a profile on the reverse side of the coins they used. The Government of the day were very keen that the Monarch should be ‘front and centre’ in the nation’s collective mind but more importantly, also their hearts! This was particularly important at a time when the words republicanism and revolution were being muttered about in other countries. It was felt that the Jubilee was an ideal vehicle to achieve this. All they had to do was ‘sell’ the idea to the Queen herself!

Victoria was eventually ‘persuaded’ to show herself to her people over a two day event on the 20th and 21st June. Following a breakfast at Windsor she travelled by train to Buckingham Palace and from there she went by open carriage through the streets of London to Westminster Abbey for a Thanksgiving Service. After her return, she then carried out a real ‘crowd pleaser’ by appearing on the balcony of Buckingham Palace. Needless to say, the Jubilee was a great success.

So successful was it in promoting the idea of monarchy, that ten years later an even more spectacular Diamond Jubilee was planned as Victoria had achieved what no monarch before had achieved – 60 years on the throne.

The day began for Victoria when she again took part in a parade of carriages from Buckingham Palace to St Paul’s Cathedral for a Service of Thanksgiving. Unfortunately, as she suffered from severe arthritis, she was unable to leave her carriage and climb the steps into the church, so she remained seated and the clergy came to her and conducted a short service outside the building!

This Diamond Jubilee was really the very first one which had an impact on the lives of ordinary people across the whole country. Thousands of poor people in London and Manchester had a street feast laid on for them and Thomas Lipton (a Grocer) distributed free ale and tobacco to those who attended the feasts. By the way, these were not street parties as we know them today. They only became a feature of Jubilees after the First World War.

A chain of beacons was lit across the whole of the United Kingdom and on a much more local level . . . .

Nottingham was awarded City Charter Status as part of these two week celebrations.

The Queen herself recorded a first when she sent an electronic message to all the countries of the Empire.

Another first for this Jubilee was the idea of a ‘Royal Recipe’ which ordinary people could cook for themselves in their own home as part of their own family celebrations to mark this event. This recipe was published in many of the local papers before the event and it was seen as yet another way of uniting the country at this time.

Some families would of course have the necessary funds and the equipment to make these themselves but for many they would not. However bakers made these to sell in their shops prior to the event and enterprising small shopkeepers enlisted the baking skills of wives and daughters to make these for their customers. In this way all might have the opportunity to share the day in some seemingly ‘Royal’ way.

The recipe is called Balmoral Tartlets and as part of the Taste of History programme, these will be on offer in the Victorian Kitchen the weekend before the present Queen’s Jubilee celebrations. It seemed appropriate to make these for this event as not only do they create a tenuous link between our two longest reigning monarchs but the Victorian Kitchen is, yet again, introducing visitors to a long forgotten tasty cake!

The recipe is given below and as usual I suggest that people read right to the end of the document as some helpful hints are given about the making of these.

To make the Balmoral Tartlets

Use the full quantity of Sweet Shortcrust Pastry as given above. The filling ingredients are –

These can be served warm or cold sprinkled with icing sugar.

Some notes about the making of these –

The recipe for the pastry is of course only a guide. Everyone has their own favourite. The original recipe as published in local papers only listed that shortcrust pastry should be used. No quantities were given.

These are called tartlets and they are by this name small! The bun tins used to make these are old ones and are much shallower than those bought today. The quantity of pastry does make between 24 and 26 of these small items, if you only have the larger holed tins then you will have to adjust the quantities used and the cooking time. I would keep the temperature the same.

If you have access to the shallower tins do not be tempted to try to make more than the number suggested as the filling can only stretch to the 24 or 26 small tartlet cases in the recipe.

When making these if you are using a hand mixer for the filling I suggest that you whisk the meringue first and set it to one side while you cream the butter and sugar and beat in the yolks. This saves the bother of having to wash the beaters if you do these two processes this way round!

A word about this strange term, ‘whisking the meringue to the soft peak stage’. What this means is that the egg whites are whisked until the peaks of the mixture are just and so standing on their own. The peaks do not collapse but the mixture would not be stiff enough to pipe.

This recipe assumes that everyone will have some stale cake lurking around in their kitchen. I had to make a small cake mix so I had some available – 2oz (50g) each self raising floour, caster sugar, soft margarine and 1 egg is enough to make a few small fairy cakes and the right amount of crumbs needed for the recipe.

Take care with the cooking of these as the sweet pastry can burn quite easily as thin and sweet = two dangerous features if the oven temperature is too high.

The tops are quite crisp when they first come out of the oven and they do soften a few days after making. They do freeze well.

This is the recipe as given in the local paper at the time but it wasn’t long before it appeared in many recipe books. It was a favourite up to the second world war and then for obvious reasons it disappeared, only to be resurrected now! There were several variations and many of the later ones suggested that a pastry lattice was put over the top of each tart, others included chopped candied peel – homemade not the bought variety of today. Also, later recipes used flaky or puff pastry rather than shortcrust. This possibly continued the age-old tradition that shortcrust pastry was used for pies for the poor. Richer pastries, which used more fat, were deemed more suitable for the wealthier in society.