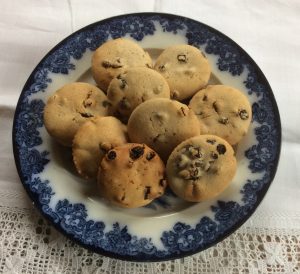 As April’s Steaming Sunday came hard on the heels of the Bank Holiday, I thought I would continue the Easter theme for this month’s recipe.

These Somerset Easter Cakes or Sedgemoor Easter Cakes are “homely” rather than “fancy” fare. They are the kind of item best eaten on the day they are made as the only raising agent to leaven the mixture is that introduced by the skill of the cook . . . . . so don’t think very light and fluffy! We thought they were perfect to serve at our Raleigh Rally as they travel well, and make a great addition to any picnic lunch for cyclists.

The history behind these cakes, as with many regional dishes, is linked to rumour and the rumour attached to this dish is –

The Duke of Monmouth, fleeing from the Battle of Sedgemoor, fell into a ditch. A local woman thought he was a peasant, so baked him these cakes to build up his strength.

As the Battle of Sedgemoor, the last one of the Monmouth Rebellion, took place on the 6th July 1685, it is likely that the recipe was in existence long before it became associated with the battle. But – who can tell?

(For those interested in English history a brief footnote about this Rebellion is given at the bottom of the recipe.)

Now for the historical footnote:

James Scott, the 1st Duke of Monmouth, was Charles II’s eldest illegitimate son. When Charles died, his brother became King James II. However, James was a Roman catholic and to the largely Protestant country this was not acceptable.

A number of leading Protestants wanted this Catholic king ousted and they supported the Duke of Monmouth’s claim to the throne.

The Monmouth Rebellion, also known as the Pitchfork Rebellion (the name gives a clue as to how successful this was) was very short lived.

The Duke of Monmouth’s army was ill prepared, ill equipped, poorly trained and small in number. In only a few weeks all was over. The rebel army was no match for the government forces. King James II was victorious and continued to reign until the Glorious Revolution of 1688.